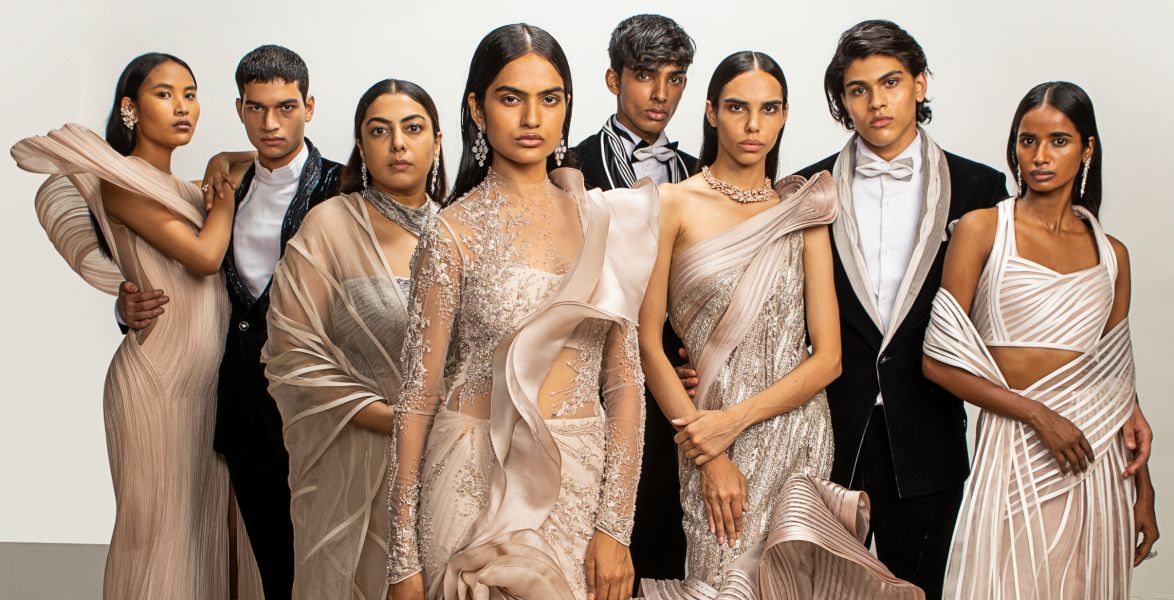 The couturier of bold ball gowns walks further down the road he opened for himself, with the opening show of India Couture Week’s first digital edition

Couturier Gaurav Gupta’s show that opened the first virtual edition of India Couture Week (ICW) organised by the Fashion Design Council of India (FDCI) on September 18 laminated some sculpted statements. Not all had to do with shape, silhouette, material, glamour, sharpness and beauty of design. All that of course. But more.

The show titled ‘Name is Love’ clearly told us that Gupta’s striking couture has stayed on course with the internal logic of his brand built on design exceptionality. Or “Occasion” as the designer brands it now—a segment non-existent before he arrived on the Indian fashion scene a little over 15 years back. “Occasion” is stamped all over his newly launched e-commerce platform gauravguptastudio.com which reportedly got his customers into a buying frenzy on the day it went live.

Only when a designer has sound internal logic of his brand, its matter and purpose, can it build, grow branches, pluck fruit, or in Gupta’s case sprout wings. Not just things that look like wings on his sculpted gowns (pardon it as a slinky metaphor) but creative-commercial ideas coiled that take can take flight even in a year as disruptive as 2020.

‘Name is Love’ was of course about the fluid freedom of beige-gold dresses, red gowns, figure-hugging emerald dreams embellished with non-traditional embroidery shapes and patterns; suits and jackets with black and polished bling. But it was a little more about extending the contours of seductive design to include genders, body types, ethnicities, sexualities. ‘Name is Love’ created a moment to pull in, give structure, beauty and “buy me now” razzmatazz to inclusivity, fashion’s top trend for the last few years. It tried to place couture back again in the mind of the consumer, after the last six months that have bleached beauty out of our immediate thoughts.

“The pandemic and the lockdown… was a moment to reflect on our actions, relationships, beliefs, the power of art, fashion and creativity. We discovered a narrative that stirs the existing dialogue, with love where boundaries are patched. Where narrow corridors of division, cults and definitions are pushed far and wide to make space for love—the only name that matters. The story is not shy, it is not angry. It aims to rise above the storm and focus all its light on love,” reads an excerpt of Gupta’s press note.

The fashion film (produced by Gaurav Gupta films) with an original soundtrack by pianist Sahil Vasudeva (to be available on music apps) was set to Gupta’s long-time associate and friend, poetess Navkirat Sodhi’s renditions. Sodhi, with her hair salted at its roots, was also one of the models in Gupta’s couture.

Trans-female, non-binary, female, male, same sex couples, plus size, existentialist realities brought ‘Name is Love’ to life. Trans model Anjali Lama, Nitya Arora, jewellery designer and a body positive woman, Rudra and Anurag a gay couple from Rajasthan, as well as Gauthami who took her acceptance of vitiligo to the fashion ramp, were among the many people who featured in Gupta’s film. Wonderfully, the styling and narration of the film did not “other us” by creating a tribe or community amongst themselves. That would have been hazardous to the inclusivity conversation. The film’s direction made sure this was a community without borders. You and I could step in, pull on a flamboyant gown or a shining suit and start floating.

Unfortunately, the collection note does not describe clothes or fabrics, embroideries or the many physical tailoring challenges it must have encountered during the “lockdown”. From ideating to placement of motifs, from patterns to finishing and fitting. Where fashion’s heart and head really live, whoever wears it. By that, ‘Name is Love’ placed the shifting sands of cultural change above fashion, which could be a fine point of debate with Gupta.

In the past, in his “all that jazz” (his words from the past) vocabulary Gupta has spoken of “the spoils of debauched royalty”, the persistence of birds in his waking and sleeping consciousness, which become motifs in his designs. He has also talked about the lehnga as “India’s LBD”, and why couture is a dialogue between the world and the couturier. Such realisations gave wings to his collections like ‘Lightfall’ in 2013 a diaphanous dance in gold, silver and incredibly fluid fabrics and shapes. Or, ‘Scape Song’ in 2017 that established Gupta’s establishment of sculpted couture on the Indian fashion scene.

That’s why I hope he communicates through his many interviews with the fashion media (a spate will predictably follow his show) how he managed to keep his factory, studios, workers, artists, fitters, tailors, pattern makers, polishers, assistant designers, those who craft his jewellery on course despite and through the pandemic restrictions. How do you make a new line of architectural couture (even if its concept and materials were partially organised before the lockdown) at a time when it is hard for industries to keep their head above water? The making of…deserves conversation.

So that even if we buy couture online, or not buy it all at a time when events, wedding functions and celebratory occasions are on mute, we remember why it matters.